IKEA has always fascinated me.

It isn't just a case of aesthetics - I am not one to care for much in that department. Nor do I have a particular affinity to particle-board furniture. Rather, what attracted me to IKEA was the fact that they offered a rare commodity - a frustration-free sense of accomplishment. 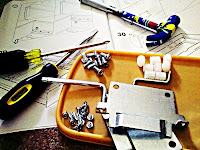 Case in point. We recently bought a regular ol' sofa, and while I was setting it up I came upon a very unwelcome sight. The main drill holes that were meant to attach the base to the back, had been drilled incorrectly. I had two options, pack the whole sofa that I had just unpacked after lugging it into the house from the rented SUV and take it back, or drill a couple of holes and fix it myself. Naturally I chose the latter.

That is when the problems began - the biggest drill-bit I had was too small for the bolts. When I got the pilot holes in, they were slightly off where they had to be. And to make matters worse, I did not have a long enough cord for my drill and had to constantly switch to the nearest power outlet. In short I spent more effort and derived more frustration drilling two holes, than I did finishing up the rest of the assembly.

I am sure most of that has to do something with me, but that is beside the point. 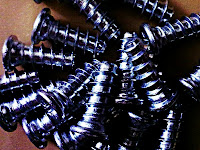 Contrast that with the IKEA experience. No holes to drill, no tool bigger than a screwdriver and every nut & bolt accounted for. Nevermind that every board I pick up is little more than saw-dust compressed together with glue; or that the mirage of the perfect IKEA room can never materialize in real-life. What IKEA sells is the experience - one that starts from impossibly perfect model rooms, to the warehouse with meticulously numbered aisles and bins, to the involved yet easy construction.

A frustration-free sense of accomplishment.