Pre-installed crud on the Thrive

Now that I've had a bit of time to play with my new fondle-slab, it is time to delve a bit more into what seems to be an odd philosophy from Toshiba in putting together the Thrive. The tablet comes with a near-vanilla version of the Android Honeycomb 3.1 OS, with a few useful Toshiba customizations and utilities. Then there is a curious collection of trial-ware and general crud, topped off with a collection of basic Google mobile goodies. Very little thought seems to have gone into in this - almost as if Toshiba was trying to be recklessly indifferent to its customers.

First the good news - full marks for minimal changes to the stock Honeycomb installation. Keeps the tablet zipping along without additional overhead while keeping the option open for future upgrades (Ice Cream Sandwich anyone?). That said, there aren't too many indications that Toshiba is going to upgrade, unlike Samsung or HTC.

There is then the matter of custom tools that Toshiba built for the occasion. They range from the very useful, like the Service Station and File Manager to the bug-ridden Media Player and the after-thoughts like the App Place and BookPlace™. The App Place is the strangest. 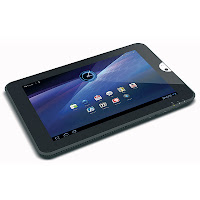 It does not offer much more than the Android Marketplace, is not mandatory and yet is an app one cannot uninstall. Clearly as useful as the points system on Who's line is it anyway?.

If Toshiba's app collection is a puzzle, it's third party catalog is a disaster. Outside of the plugins for Adobe® AIR® and Flash, the rest are trial versions of tools that we probably have better, free alternates available for. To add insult to injury, one cannot uninstall them - not even when you buy the full version.

I get that there is an economic reason to include trial versions, but the inability to uninstall is little more than spite. If ever the argument was, “Hey, we think these are must-have apps, so try them out and buy them so we can a cut of the revenue”, there is no sign of it. Instead, the pitch now is, “I don't know or care if you like these apps, but because others have uninstalled them in the past, we are not gonna let you.”. Seems like a rather haphazard way of gaining supporters among your customers. Just try searching for Kaspersky+ Thrive and you can sense the frustration.

Dictating how you want others to use your device is a futile exercise - Apple gets away with it, because they can. Toshiba cannot. So whoever is making the final call on what to include and what not to, remember this - you are not Apple. Don't act like them.