Sunday did not start well for my Thrive. I settled down with a cup of coffee to consume some video material, while using a soft cloth to gently wipe down the fingerprints on the screen. Halfway through the video watching my left hand, which was holding the tablet, started to ache. So I switched hands, when I noticed this hairline crack right under where I had just been holding it. 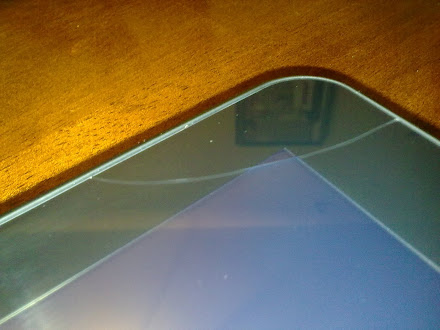 As I was saying, Sunday did not start well for me either.

We obviously went into a tizzy, trying to figure out what went wrong - did we drop it (no), did we crack it against something (no), was there a goblin in the house that goes about cracking LCD screens (no). Until the answer was fairly obvious, the glass cracked as I was holding the tablet one-handed and cleaning screen while watching a video.

Turns out, I was not the only case of this happening. Amazon has an eerily similar story, another dealing with a hairline crack and one with a peel-off LCD. Others have stories of shattered glass after a short drop. ThriveForums.org has this heroic tale of a dropped tablet and it's reincarnation.

Now here is my experience. I called up Toshiba on their customer support number (1-800-457-7777) to see if this would be covered by the standard warranty - No. They suggested I instead contact their out of warranty repair services. Turns out their starting quote for repairing the LCD is $354. Which is about $55 more than what I paid for the tablet.

In summation, the warranty does not cover it, and repairing it costs more than what I paid for the tablet. The obvious choice, I thought, was to kiss the warranty goodbye and do it myself. That is when it started to really stink.

NPD (National Parts Depot) is the parts supplier for Toshiba in the US. At the beginning of the year, they carried the replacement touchscreen and (4) sponges for $82 plus shipping. At some point, Toshiba stopped fulfilling orders for that part, and instead started to just sell the top case assembly for $180 plus shipping.

I get that LCD screens crack. I understand if it is too expensive for Toshiba to repair it for me. But when it feels like Toshiba systematically believes it needs to make money by making cheap parts scarce - it is time to stop encouraging such companies. Sorry guys, no more Toshiba purchases from me. I am just going to use the Thrive as-is and see how long it lasts, while buying exactly diddly-squat worth of accessories.

Thanks for leaving a really bad taste in the mouth.

Same thing happened to me...I could not believe how easily the screen cracked during normal use of it. No more Toshiba for me.

My less than 1 month old Thrive did the same thing last night. I picked it off the coffee table with one hand (4 fingers under the bottom with my thumb on the top glass (NOT SQUEEZING) cradling the thrive. While i was walking to my bedroom.. i heard a crack sound and when i put the thrive on my bed... i was horrified the screen has cracked. I have the 1 year SystemGuard Accidental Damage Protection. I wonder is Toshiba will fix it under this warranty or try to wiggle their way out of it??