Continuing with the posts about good webcomics, here is a different type of comic - called Dinosaur Comics. What, you ask, is so different about this comic? Well, for starters every strip looks exactly the same. That's right, the exact same panels in every single strip. The only different is the dialogue taking place between the characters. Imagine that, every story looks exactly the same, but tells a completely different story. I looked it up, this type of comic writing is called a constrained comic.

There are three main characters in the strip, starting with T-Rex. T-Rex is generally a fun guy, in a goofy self-centered sort of way. Utahraptor, is T-Rex's friend and sometimes the voice of reason in the strip, and sometimes the foil to T-Rex's designs. As confirmed by the comic's creator, Utahraptor is also gay. And finally there is the Dromiceiomimus. Dromiceiomimus was a one-time love interest of T-Rex, and that brings about an interesting love-hate relationship between the two. 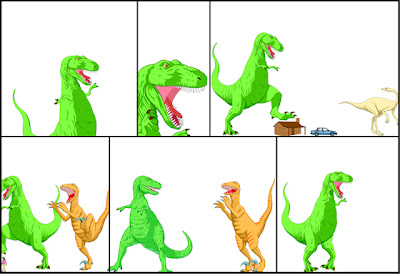 Every strip looks like the above. Sometimes T-Rex is funny, sometimes he is deep, he communes with the God, sometimes with the Devil. Here are a couple (after the break) to get you started.