Hiroshi Ishiguro is an interesting man. He is a Japanese roboticist who works on trying to create extremely life-like humanoid robots. And in doing so, he is bravely testing the depths of the uncanny valley.

Which begs the question - what is the uncanny valley. This is an idea, proposed back in 1970, that states that the more realistic a robot is, the more empathetic a response it evokes in humans. At some point, when a robot begins strongly resembling a human, this empathy changes into sharp revulsion. The empathy returns as the robot becomes indistinguishably human. This is the reason why the kid in the movie Up looked cute and Jolie in Beowulf was creepy.

Which begs the question, why bother trying to leap over it? And that is where, I think, a lot of the promise of robotics seemed to have been frittered away. There seems to be an inordinate amount of effort spent to replicate the human anatomy, when it may not necessarily be the best suited for “robotification”. If form follows function, there are very few functions where the human form is best suited to perform optimally. The human form is built for versatility not optimum capability. For any specific action that needs to be performed, there probably is a non-human form better suited to act. Why them spend the time re-creating the “jack-of-all-trades” human form? 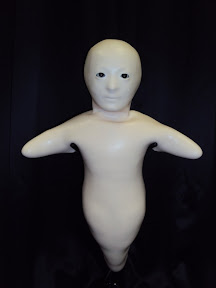 Then there is the human face - a really versatile communication mechanism - that Hiroshi Ishiguro wants to recreate as a robot. For that purpose, he created the Telenoid R1. Now the idea of this robot is to have an overgrown embryo in your hands, that would re-create the expressions of a person far away. In effect a telephone that displays the expressions of someone far away. But did you look at it? Is that something you want to hold in your hands while talking to a loved one? And what is wrong with a video call?

Coming back to the reason for the post, there are some valleys that need to be crossed. There are others that need to to stay put, so that they can act as a moat between robots and humans.