Swapping the battery on an iAudio X5 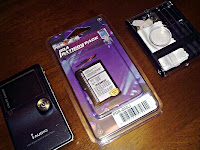 The iAudio X5 running a Rockbox build has been my default music player practically forever. Even after a forgetful incident while deplaning a Lufthansa flight caused me to lose my first purchase of the X5L, my replacement was a 60 gig X5. It is bulky, clunky and rather plain but has everything else I needed in my player. Great hardware, FM radio, Aluminium chassis (survived two falls), good battery-life, wonderful sound and finally hackable hardware.

When it's battery finally started to give way, the portable player became a PMP at home, and when the input voltage fell to 1.8v it was time to change the battery. Thanks to this thread, I had enough of a peek into the internals of the player and the name of a replacement battery. RadioShack has the Dantona 3.7V/1100mAh Li-ion PDA Battery for Cowon/iAudio (Model: PDA-203LI | Catalog #: 55027810) available online for $25. If you find a local store that does "Ship to Store" you could get it delivered for free. This replacement has slightly lower capacity than the original, but there hasn't been much success in finding a battery with higher capacity that fits. 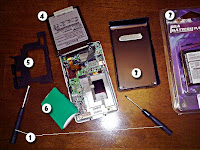 Replacing the battery is not that difficult. My only hesitation in starting with it was that I did not have a solder iron. And I was not going to buy an iron plus lead for what could be just two joins. I figured I could do a quick and dirty splice instead. The detailed steps are given below, with the numbers in the text referring to the numbers on the image.

You need a couple of small screwdrivers [1], one with a flat and the other with a Phillips head. I used a set that came as part of a spectacles repair kit. You also need to get the batteries [2] before you begin.

To get the back of the player [3] off, using the Phillips driver to unscrew the four screws holding it on. The first thing you will see is the hard-disk [4] and a tape holding it down along the top. There are also a couple of wires running down the sides as well. Carefully separate the wires, undo the tape and flick the top of the hard-disk to get it off. The hard-disk is connected to the body via a cable, which you should try your best to never damage.

Some versions, have a rubber cushion [5] between the hard-disk and the battery, use your flat screwdriver to gently ease it out. This will expose the battery [6] allowing you to pull it out and show the two wires connecting it to the circuit board. 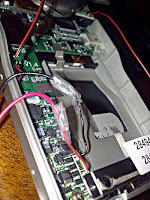 Because I was not going to solder the battery on, the other approach was to cut the existing battery, stripping away the insulation for both the existing wires and the new battery and splicing them together. Which was when I realized I did not even have a decent insulation tape, so regular tape had to do instead.

Couple of tips. The wires are multi-strand. This is both good and back. Good, because it makes splicing that much easier. Bad because any weakness you introduce while stripping the insulation may cause the strands to break and short the board itself. Make sure you blow the board clean before re-assembly.

That is it. Repeat the steps in reverse to put everything together. In my case this left me with a player that is once again portable. And it still as great a media player.