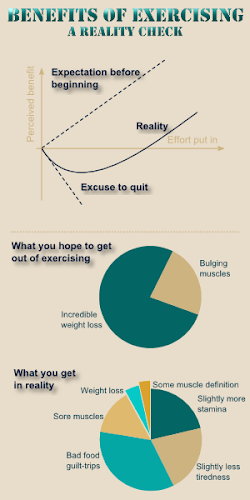 My attempt at making an information-free infographic. All numbers are made-up, imagined or worse - "felt".

When I had first stopped making excuses for not working out, I confess my expectations were rather rosy. I had both underestimated the neglect I had heaped upon my person over time, and had easily overestimated the turnaround time required to undo said neglect.

I had heard about the 30-day rule, and figured that would be the least I owed myself. But what the rule does not tell you is that there are legitimate reasons to quit exercising within that period. Legitimate because your body vehemently disagrees with the need for exercise and tends to protest rather persuasively. Getting through the first 30 days is like trying to impress a teenager. If you get so much as an imperceptible nod, you can call that a resounding success.

The second source of perpetual disappointment was the weighing scale. It first inched up, then decided it liked the higher perch and refused to come down. Yeah I felt better, but that was no measure of success. It is as if one came to work for the satisfaction and not the money. Maybe the analogy is not perfect, but you get the point.

But as they say, there is a silver lining to every cloud of misery that is exercising. Mine was that I got to make an infographic. And for once, I did not have to bother with collecting information for it.

Sport and exercise science is a wide-ranging topic area and covers sports performance, training and nutrition through physiological, psychological and biomechanical interpretation of research, whilst attempting to understand and improve performance in all sporting individuals. running machine