This post is about the broken business models for the music and film industries, and another argument for fundamental reform in the entertainment business. Based on two articles in Techdirt - one dealing with the accounting for Movies (Harry Potter and the Order of the Phoenix, to be precise) and the other dealing with profit sharing in Music.

Firstly the movies. All movies are set up as a separate company. This company takes all of the film's costs, while giving up 35% of everything the movie makes as fee to the parent studio. So while the studio starts to make a fee off every cent the movie brings in, the movie itself continues to run at a loss unless it is super hit like, say, Avatar. As Planet Money found out, the movie Gone in 60 seconds, that everyone in the world has seen - is losing $212 million. After the break is the leaked income statement for the Harry Potter movie that originally prompted this post.

The music industry follows a similar model. Here instead of the separate movie company, the impacted party is the artist themselves. All costs borne by the artist while 63% of everything the album makes goes to the Record Label before it is offset against the costs. Apparently Courtney Love did a great job breaking down the accounting almost 10 years ago.

There you go - no wonder the MPAA and RIAA can find numerous examples of loss-making movies and albums. It is because they are designed to lose money in the first place. 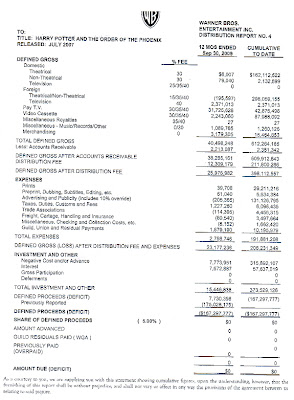