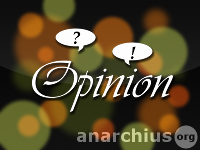 The recent earthquake and tsunami in Japan is reminder that natural disasters have a magnitude of their own, and irrespective of where they strike, there is not much we puny humans can do. All the technology one can deploy is, at best an early warning, at worst a dangerous sense of false security. At the end of it all, one can only hope the human cost of the disaster is minimized.

I am still hoping that things start to get better soon, especially for the tens of thousands that are without basic amenities in sub-zero conditions. But through it all, I cannot but help consider certain aspects about the general reaction to this disaster. It is difficult to be objective when human suffering is involved, but here is an attempt.

During the first couple days of the disaster I realized a certain detachment in me with regards to the earthquake and tsunami. As if the news did not really get through to me. It was not until I took pause at the details emanating from the various news reports did the full impact of the disaster sink in. I realized that I was, unconsciously, tuned out to disasters on the news. Like the boy who cried wolf, our media is obsessed with keeping us abreast of everything, as if it is critical for my survival. When every day and every headline is blared out at the highest volume, how can one distinguish between the latest antics of a movie star and a disaster that is impacting millions? When every news programs promises to "follow the latest developments" for me, it is increasingly difficult to determine what news I care about. 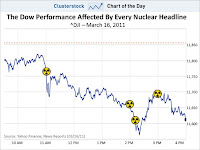 The markets, predictably reacted by falling. Both the Japanese markets and US markets moved in step with news emanating from the disaster zone. But for all the rationality of the markets there is a very little linkage between the actual economic impact of the disaster. The image on the right is an example of the (ir)rationality of the markets. The real question is not whether the market is rational, but the fact that this is yet another drum beat into the echo chamber of the daily news cycle. Yet another source of ominous calamitous predictions of impossibly dire consequences.

The third aspect, which is also the reason for the title of this post, is Nuclear power. Most news coverage has been (mis)using terms like meltdown and radiation exposure, because they sound great on the evening news. What this does is two things. Firstly it takes away from coverage of the real tragedy, thousands needing basic necessities along with the real rebuilding that needs to happen. Secondly it helps bring about suboptimal decision making for our future, due to the inherent bias we have to fear the rare but spectacular.

As a commentator on Marketplace puts it...

... a 9-plus Richter scale earthquake and tsunami represent about as extreme an event as any nuclear reactor could ever face. If the danger from this shock is contained, nuclear will have passed its most extreme test. It's like the movie "Apollo 13" -- this is either nuclear's worst disaster or finest hour.

There is so much that we can understand, learn and admire from the people facing incredible difficulties in Japan. The best we can do is help in our own way. The worst is fall prey to the constant drumbeat of fear and let the rare-but-spectacular determine how we decide to live the biggest chunk of our rather mundane lives.

Update: An unbelievably awesome rant from TechCrunch, about the hysteria surrounding the nuclear "apocalypse".