The True Lord of the Rings 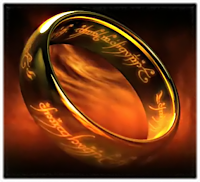 We had recently re-watched the Lord of the Rings trilogy, in its extended cut glory. All 11 hours of it. One of the advantages of the extended edition is that you not only get extra scenes, but you also get time to reflect on what you just saw. One thing that stood out for me was Galdalf's insistence at having his way, and his petulance when things were not according to his machinations. In that he was remarkably similar to Saruman, except for the fact that they were on opposing sides in the war for Middle Earth.

"The old world will burn in the fires of industry. Forests will fall. A new order will rise. We will drive the machinery of war with the sword and the spear and the iron fist of the orcs."

The above quote from Saruman struck me not as evil, but as the exact same thing that we have all been doing since the dawn of the Industrial age. Or consider this, from the point of view of the Ents.

"There was a time, when Saruman would walk in my woods, but now, he has a mind of metal and wheels.
He no longer cares for growing things."

Tolkien's dislike for industrialization is well known. Within that context one could argue that the LOTR series is basically a re-write of history by the victors. Not convinced? Consider this. The men from Harad, were no different from Numenoreans, but for their appearance (tall, dark and fierce looking) and their choice of allies. For that Harad is portrayed a strange land and their people as barbarians. Xenophobia anyone?

One Kirill Yeskov, took this idea of LOTR as a victor's view of history to its logical conclusion. His russian book, The Last Ring-bearer, is the LOTR story told from the point of view of the vanquished. The English translation is available for free, in text, PDF formats. I converted the text to .MOBI format for use on my Kindle.

For the record, I am delighted Aragorn won. But unfortunately that also means we we will never quite know what Sauron was like. Did he like his beer cold? Was he a soft or hard taco guy? And what exactly was his purpose behind trying to decimate all humans from the face of Middle Earth?

Image is screen shot from lordoftherings.net