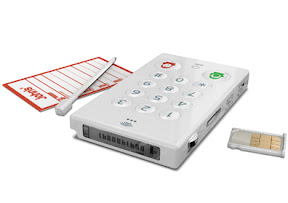 John apparently is a technophobe. And so his phone is as bare-bones as it gets. Unfortunately, John is only a moniker. Fortunately, it is also a company that makes the most simplest of cell phones - no camera, no operating system, no apps, not even text messaging. In fact the only thing you can do with the phone is power it up, make calls, hang-up, and (if it tickles your fancy) set the ringer volume level.

The phone clocks in with impressive specifications. It comes quad-band unlocked, includes a screen at the top edge to display inbound and outbound calls. The 1200 mAh battery stays on standby for about three weeks. The best part is that the phone comes in with two ways to store numbers - either linked to speed dial or noted on a paper phone-book embedded at the back of the phone (slot available, paper and pen sold separately at 3x for €9.95). Thankfully, it uses a micro-USB cable for charging, reducing your charger clutter. The question of course is, if you were technophobe John, why would you have a charger clutter.

By first impressions this seems to be a phone designed for John and Jane, the technophobes. But there is potentially a bigger market out there. Standard issue for sensitive workplaces - like the army or defense installations. A daily-swap program for contractors having access to classified information. An unbreakable version for every kid. And the list goes on.

But that is not going to happen at €69.95 (euros). Here to a solid demand that drives the price of this puppy down. And just maybe, John will need to buy a blackberry to keep up with the explosion of demand.