The life and decline of WWW

The terms first. How is the Internet different from the world wide web or WWW? The Internet is the means to connect all of the world's computing devices together, while the WWW is that part of the Internet you access with your web-browser. The world wide web includes every website you visit, in all of its textual glory sprinkled with the innocuous yet wondrous invention - hyperlinks.

The evolution of text to hypertext is perhaps the single most powerful inventions in modern times. With the ability to embed links in text, suddenly it was possible to organize and access information in ways unheard of. A single link was all that separated any two pieces of knowledge. In fact, the two pieces of knowledge did not even have to reside on the same physical machine - as long as there was a means to connect two or more computers together, hypertext would allow anyone to access the information. With such power in the hyperlink, it was a shame not to pursue the goal of connecting all of the world's information stores together, allowing one to link to and access all the information from anywhere. Hence the Internet.

The success of the Internet beyond the initial goal of hyperlink oblivion, was its flexibility. Now that we had all these computers linked together, it was possible to exchange a lot more than just text through hyperlinks. And one did not have to limit the end points to computers. Instead you could connect PDAs, phones, music players or even refrigerators.

Initially the Internet was constrained - by lack of bandwidth. Exchanging anything more than text was painful. With the increase in bandwidth, communication was no longer limited to text. First it was images, then music. The increase in capacity contributed directly to increasing links between text and other multimedia. But this was still the days when downloading a picture meant waiting for it to arrive line-by-line across a phone line.

Even at this point, the principal means of getting to that picture or mp3 was via the world wide web, using your browser. As long as the multimedia was being linked to, the WWW was still the best way to get to it.

Thanks partly to the dot-com boom, there was a massive investment in opening up the capacity for communication across the Internet. This explosive growth in bandwidth, along with retail broadband communication, came the next era of accessing multimedia - streaming it instead of linking to it.

As the Internet grew into real-time capability, it was suddenly possible to cut out the middle man - WWW. Hypertext that began with the humble idea of linking information, had grown to assume the role of carrying multimedia to compensate for the lack of speed of the Internet, was suddenly irrelevant. It was now possible to go around the constraints and freedoms of hypertext. But there was still the need to have something to receive the streaming media - enter web applications or apps.

It is no accident that the era of the apps coincided with the growth in streaming capabilities of the Internet. Apps demand cheap bandwidth. Unlike the robustness of the WWW, apps are built around user experience. And unlike the WWW, apps allow end-to-end control. Doesn't matter if the app was built on the iPhone or popped off a browser, effectively it isolates user experience away from flexibility of the WWW to the immersive capability of the app. 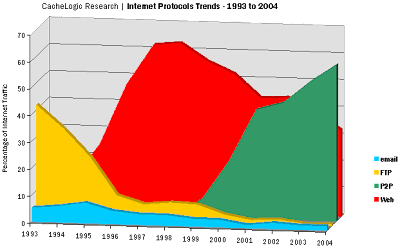 The data is firmly pointing in the same direction. The above is a dated graph courtesy UC Berkeley, but showing the relative drop in bandwidth used by the web as compared to the other protocols. Updated data is available with the Wired article here. Notwithstanding very pertinent arguments to the contrary, the definitive move away from the broad set-up called WWW, into the narrower app-based is an eventuality. Something directly precipitated by the success of the Internet.