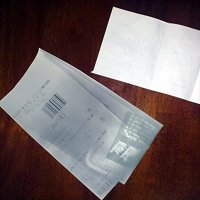 This is a post about how mother nature tried to photocopy my car. At least that is what I think it is. Consider the first picture on the left - at the bottom are three receipts I had left in the car, clipped under the visor, while I waited for my shirts from the laundry. They were normal when I left them, but when I reached to pull them out three days later, what I saw surprised me. I got this darkened mess, that clearly reproduces the child seat warning message from the inside of the visor.

Quick background. The receipts are generally printed on what is called a 'thermal paper'. A thermal paper works by darkening in response to applied heat above a particular threshold. For example, you could cause the paper to darken if you left it in a car under direct sunlight for an extended period. 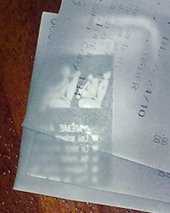 However, I do not think that is the reason for the darkening. Consider the following - firstly, I parked my car at work in a covered parking structure for the entire time. Secondly a closer examination of the darkening shows that it was not the gradual darkening of a car left in sunlight. Instead it was hot enough and short enough to cause the darker printed portions of the visor to visibly absorb more heat than the whiter parts of the visor. Finally, there was an electrostatic discharge event (aka thunder storm) during the period with the receipts under the visor that landed close enough to blow out the garage opener, about 10 feet away.

Which brings me to my conclusion. The lightning during the night struck close, probably the car itself. This caused a quick but intense heating of the air around. During the dissipation of this heat, the darker parts of the car heated up quicker than the lighter parts resulting in a “natural” photocopy of my car.