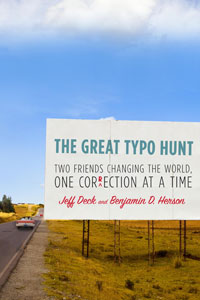 Funny story on NPR about a guy who, one day, decided to embark upon a cross-country quest to correct typos. Jeff Deck, the founder of Typo Eradication Advancement League, and his buddy Benjamin Douglas, set out to not just identify, or photograph, but actually fix typos in public signs. It went well, until the duo were busted for “fixing” a historic marker at the Grand Canyon. Vandalism - was the term the authorities preferred instead.

They are back, with a book now, that chronicles their journey. For two and a half months they were out and about, finding 437 typos and correcting more than half of them. While they found some support for their effort, there also was a lot of apathy. Culminating in the run-in with the law.