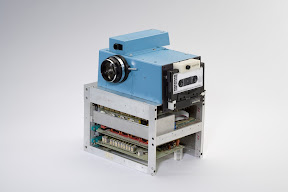 What you have here, is the first ever digital camera.

In this blog post over at Kodak, Steve Sasson, the inventor of the digital camera, gives some detail into a phenomena that is so omni-present today.

Built off parts from a Super 8 movie camera, along with a nascent CCD imaging array, the camera used a digital cassette to store the images. It took 23 seconds to complete write the recorded image to the cassette. Thank God for solid state memory eh?

To play it back, a cassette reader contraption tied to a TV set. And the 8-pound camera recorded a - wait for it - 0.01 mega pixel picture. Bad enough to require an up-conversion to display it on a TV. And of course Kodak being Kodak, called it "Film-less Photography". That said, even they weren't that oblivious to the impact this would have on the future of photography. From the post...

"The camera described in this report represents a first attempt demonstrating a photographic system which may, with improvements in technology, substantially impact the way pictures will be taken in the future."