Swype was a company I had followed ever since I first saw their video describing a new method for text input. Swyping instead of typing. A few days ago, I was able to take advantage of their limited beta for Android mobiles, and install it on my wife's Nexus One. And boy was it good! 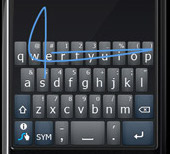 Here is how it works, instead of typing the letters of a word on a soft mobile keyboard, you swipe a rough pattern through the corresponding letters on a QWERTY keyboard. For example, the pattern on the left is tracing the word - Swype. A couple of things stand out - firstly you do not have to be very precise. The tool is very forgiving and can recognize your intent easily. Secondly Swype comes with a 65,000 word dictionary that it adds to every time you type in a word it doesn't recognize. Both key features promise a very easy interface.

But how easy to use is it in practice? My wife picked up phone after having Swype enabled on it, and after tracing two words exclaimed excitedly - This is going to change everything. If you knew my wife, that is a sentence she wouldn't normally use for just any app. In addition Swype has a ton of tips and tricks that turn up the speed on mobile text input.

The Swype beta for Android mobiles is now closed. Other platforms are not supported yet, but according to the company, support is in the works.

The product works. The next challenge for the company is to quickly scale up the platform support - Android, iOS, Symbian and Windows Mobile. And to translate this support into OEM deals like with the T9.