A week ago, I got to watch an NBA game courtside. And when I say courtside, I mean right up against the playing surface, close enough that a trip and fall could mean bad news for me. While there may be more proof if someone had recorded the game, the image on the left is the closest I have (click to enlarge). That is a screen grab from the game summary, showing the back of the head of yours truly. Granted the game wasn't that great, but I learnt things from the experience that make it truly memorable.

The biggest was that all the players looked surprisingly human. It must have been the distance and the angle, because you could see the tense walk, the relaxed stroll, and the rush after a score, writ large on their faces. And most surprisingly for me, the relief when they pass the ball on to the star on the team. You can actually sense the difference between the confident play by the star and the "hot potato" passes that get to him. I had always imagined that the commentators made it up - never realized the body language could be so loud.

Everyone, and i mean everyone, wipes their shoes before coming on. There is an unobtrusive pad tucked behind the column where everyone - the stars, the kids, the cheerleaders, the performers, and the corporate honchos - has to wipe their shoes before entering the arena. And the side effect of this obsessive cleanliness is the familiar squeak-squeak of shoes on wood. 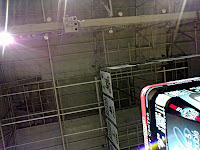 If you are ever scheduled to do anything during a big game, prepared to never be ready for it. Say you are a playing a one-on-one with another guy in a sumo suit. One second you are walking through the entrance and the next thing you know, a mascot is flying in the air towards you to knock you on your behind. Or say you are scheduled to show up on television and wave while the voice in the air talks about something you represent. One minute you have a guy in a suit chatting inanities with you, telling you stand just so and face that way. And the next you know there is a blinding light on your face and a camera from halfway across the stadium zooms in on your pores. Talk about deer in a headlight.

Down on the court, in spite of all the din in the stadium, the players can actually hear each other and the coach. The fans makes it difficult, but it is not half as bad as the television makes it feel. And when you can hear each other, guess what else works - heckling. When you are sitting that close, and yell someone's name out - it is pretty hard for them not to turn in response. 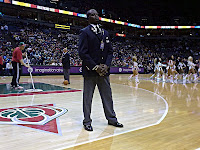 The players wear enormous shoes. With no innuendo, if you leave your foot stretched too far out, it is only a matter of time before a throw-in results in your toes being squished out from under you.

And last but not the least, staring at cheerleaders is uncomfortable when you are close enough for them to look right back at you. Gawking is best accomplished via the Jumbo Tron. Moreover they all wear too much makeup.