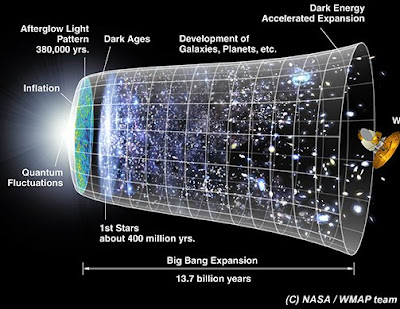 Stumbling onto NASA is such a time-suck. The latest foray was the image above, that piqued my curiosity, and I came upon the Wilkinson Microwave Anisotropy Probe (WMAP), a satellite based mission that for the first time helped detect and map Cosmic Microwave Background (CMB) radiation in great detail. The probe helped establish not only the the census of atoms in the universe, but also helped reconstruct events leading up to a fraction of a second after the Big Bang. Information gleaned from this program helped build the picture above, which is a timeline of our universe's expansion.

The WMAP probe turned out to be a handy little busybody. Launched in 2001, the satellite was supposed to travel to an orbit beyond Earth called L2 in about three months and spend another 2 years collecting data. But the probe continued to send data through August 19, 2010. And the data turned out to be a gold mine. 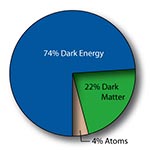 Findings from the WMAP mission are impressive. Many recent changes about our understanding of the Universe and its origins seem to be linked to data from this probe. Among those I found the most fascinating, was this pie-chart that classified stuff in the Universe. Turns out only 4% is everything that we see - stars, planets, nebulae and dark holes. An overwhelming chunk is stuff that is causing more than expected attractive force in the Universe (dark matter) and way more than expected repelling force (dark energy). While I had read this before, spending time with the WMAP site, helped put a lot of it in perspective.

And yeah, I learned about Lagrange points, with pictures.