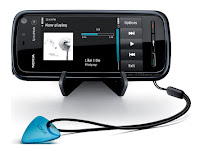 Of the two, the second one seemed to have worked its magic on the phone, really making the interface more responsive, while the first one delivered the bulk of the enhancements. With two major upgrades in less than 3 months, it is ample proof that Nokia is indeed looking to the Nokia 5800 as a testbed to iron out any and all problems with its touch platform, before it start rolling out the big guns - the E series and the N series. That said, back to the question at hand - what really works with this phone.

In short, the biggest positives of the phone are its capabilities - the sheer hardware capabilities and the underlying S60 software. Which leaves the interface components and applications. Coming up in the next post - where the Nokia 5800 definitely needs a little help.