A Preview into the next Block-Buster from Google

I logged into Blogger on the morning of 7th May, to discover a link that proclaimed that I was an 'active' user and invited me to signup for a preview of Google's much awaited block-buster - GMail. Considering this is what I had been waiting for, ever since I heard the first whispers about GMail, I was more than happy to oblige.

The signup process was quick and painless. The GMail signup wizard picked up my name and email from Blogger, and brought me to a page that asked me to simply choose a account name. The text box that asked me to choose an account name, had a helpful little button right underneath that said "Check Availability", to check if the particular account name was valid and available. Just the signup process showed how professional Google was going to be about GMail. 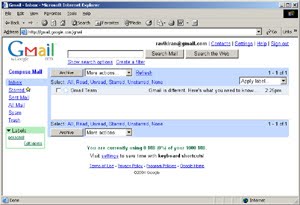 Soon, I was done with the registration and was dropped into my new GMail interface. The first thing that struck one, was the simplicity and cleanliness of the interface. A big friendly GMail logo and the omnipresent Search bar on the top. There was no toolbar cluttered with options, just a drop-down and a single button. The left hand side had just 7 links. The actual section where the mails are listed had just four columns without any headings. The entire interface was designed to be clean and simple, to the point of being austere.

For GMail, there is one means for classification - labels. Labels are defined by the user and each conversation can be 'applied' any number of labels. These labels can then be used to filter any display showing just that mails that you need to see. There are no folders, where mails can get lost, only filters that can be removed and reapplied with a single click. So much so, even the search is just another filter on the entire listing of conversations.

The only 'folder' that is hard coded is the "Archive" option, which effectively removes the mail from the inbox view. Another filtering/flagging option available is the "Starred" option, which visually distinguishes the various conversations. Starred option however extends to individual mails as well, meaning that individual mails in a conversation can also be starred.

The actual interface showing the mails in a conversation is unfamiliar but once you get used to it, is very powerful. Each mail in the conversation is shown in a separate 'pane'. These panes are ordered linearly by time. Luckily GMail has refused to show the conversation in either a threaded or nested format, which increases simplicity and correspondingly accuracy.

The difference between the 'pane' and a mail is that a pane automagically removes all the quoted part of a mail. That means, in a conversation, the 10th mail usually contains the quoted text from the 9 previous mails. The pane however hides this to show only the content from the 10th mail. Of course, it is possible to show the quoted content too if desired. Drop into a relatively heavy conversation and you will see all the panes tightly stacked together. One click and this opens up into a looser stack, showing just the sender and the time for each pane. Each item can then be clicked to open, read and clicked again to send back into the stack.

Contacting your Contacts and Composing your Mails

Every person you mail to, or get a mail from is automatically in your contact list. How absolutely brilliantly simple and obvious. Why ever were we required to use divining capabilities to predict which of the contacts we are dealing with would be needed by us in the future? Of course, with 1 GB of space, you can afford this extravagance. Right now, though, the only contact information you can include is the Name, email and some Notes. I am not sure if I will not miss having fields for at least phone numbers. Another thing, as the owner you are automatically given a nickname 'me'.

Click on compose and you will be taken to a page with three text boxes and three buttons. Again, GMail's fanatic focus on simplicity shows. But true brilliance hits you when you start typing addresses in the "To" box. GMail's auto complete feature gets typing addresses back in fashion. If you were not impressed enough, hit the 'undock' icon on the right top corner of the compose screen and the entire compose screen pops right off the browser into a new window. Remember all of you who like to compose in a new window, while browsing messages in another? Well, GMail knows exactly what you are talking about.

The spell checking is another beautiful feature. GMail does a damn quick job of marking out all your mistakes in red, allowing you to interactively edit them. However, testing it with an excessive amount of text did produce some unexpected errors.

Keyboard Ahoy! and other UI features

Google extended its "keyboard shortcuts" beta feature to the GMail UI. This means that you can use a number of features without having to reach out for the mouse. This combined with the auto complete feature for filling in addresses is a hark back to the age of the *NIX interfaces, where the keyboard ruled. For those of you who believe in doing things fast, time spent in picking up at least a few of these shortcuts will prove to be a very valuable investment indeed. Those of you who don't give a damn about speed, please please please, just try out the feature once. The sheer genius of the implementation is bound to floor you completely.

GMail uses a variety of on-screen prompts to tell you what it is doing. Pages load blazingly fast, and if any one of them takes longer than a second to load, a brief floating message flashes on the top of the page to tell you that the page is "Loading...". While browsing a conversation, a similar floating message flashes on the bottom of the message, telling you whose message is expected next.

Another simple yet highly effective trick GMail uses to make life simple for us is to mark out those conversations that are addressed specifically to you, versus those that are part of a mailing list. They call this the "Personal level indicators". Again, an idea that is so dumb, that you wonder why no one else had thought of it before.

For most of us, having our email with our_stingy_free_service_provider.com the single biggest reason to defect to GMail would be the 1 GB of email space it offers. For most of us, this would be a life-time supply of email space. This however has not been one of the biggest reasons GMail has been in the news recently. The big controversy surrounds GMails proposal to parse through user email and display relevant ads alongside the message.

Compared with yahoo's practice of appending monstrous, irrelevant ads to every email this is hardly an issue. Further, with Google's repeated clarifications that no human would ever access any email information, while only machines would, leaves little reason to be unhappy about. Machines keep reading our mails all the time. Spam filtering software do that. Web based email services do that while displaying messages. List servers (a la yahoogroups) do that when they are munging email headers. Google does not even change the message content, when it parses the mails, but only displays relevant ads alongside the email. Considering Google's stubborn insistence at being honest and open about all it does, I don't see the reason for any controversy.

The ads themselves are unobtrusive and plain text ads. And they are placed discreetly to the right, just like in Google searches. If you have searched on Google, and have not been bothered by the sponsored ads, there is no reason for you to even give a second thought to the ads in the google inbox. In fact, considering that for once a company is taking my privacy seriously, and the ads themselves are so cutely non-intrusive, I might be tempted to check a few of them out, just for the heck of it.

Final Words of the First Look

GMail is an application that has been engineered in the REAL sense of the word. In a world where applications are a lump of collected functionality, GMail outshines almost every application known, let alone email clients. Conversations to store emails, labels instead of folders to classify conversations, keyboard shortcuts, auto complete feature for the addresses are so mind-numbingly essential, that I will start missing them from this second on in my email client. This combined with 1 gig storage, automatically stored contacts and the simple elegance of the UI builds GMail into a formidable package.

Those of you who did not get to see it yet - Tough Luck People!